This Carbon-Based Super Material Could Change the Energy Storage Game 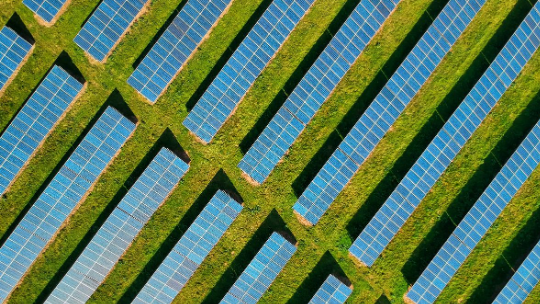 Imagine an entirely renewable energy powered world connected to the sun. Is graphene the missing piece of the puzzle?

According to S&P Global, lithium supply is projected to triple by 2025 but observers wonder if it will be enough to meet the demand as EV production ramps up.

Even though the alkali metal commonly used in batteries is in high demand for the medium term, investors don’t seem as thrilled about lithium’s future beyond 2025. In 2019, lithium prices tumbled as electric vehicle production decelerated contributing to excess supply. Even so, there’s no denying lithium’s ubiquity as a growing number of industries depend on it to power cars, phones, cameras and nearly every other consumer device under the sun. Regardless, lithium’s dominance might be in doubt as the world’s needs change and the latest developments in battery technology pursue more robust, safer, and sustainable materials for storing energy.

Efficient and cost-effective energy storage has long been regarded as the missing "silver bullet" needed to address wind and solar energy’s intermittence problem and accelerate further proliferation of renewables. However, a new and lesser-known substance -- graphene, a carbon-based “wonder material” -- may be able to address many of lithium-based battery technology’s shortcomings and drive a step-change in energy storage when used as the internal material in what are known as ‘supercapacitors’.

What are Graphene Supercapacitors?

“Graphene is nothing more than a single layer of carbon, one of the most abundant elements in the universe. Once you've created a layer of graphene, which can be done very quickly and easily, it is essentially a semiconductor and it can replace anything that silicon is currently being used for, which is anything from a computer processor to a solar panel.” – Abe Cambridge, CEO, The Sun Exchange on The Orange Pill podcast, Episode 0001

Graphene supercapacitors merge the charge and discharge characteristics of batteries and capacitors and optimise these capabilities to futuristic proportions. The usability implications of this technology are impressive to say the least. Just imagine charging your electrical vehicle in an instant rather than the eight to twelve hours it takes today!

Equally fascinating is the potential graphene supercapacitors have to set a new standard in alternative energy and replace batteries (and all their restrictions) as we know them today.

Lithium is an integral component of batteries for electric vehicles. As EV sales have soared so has the need for batteries, in turn fueling lithium demand.

For a long time, lithium has been the standard stuff of energy storage. The crucial design dimensions of lithium-ion batteries – weight, voltage, and energy density – hold distinct advantages over its critical metal predecessors used in battery manufacturing for consumer products.

Despite our reliance on lithium batteries, the safety and durability of these batteries have been called into question. Meanwhile, graphene, although largely untapped in renewable energy, signals a promising way forward for new technological breakthroughs in batteries: more than quadruple the energy density of Li-ion batteries, safer, low cost and eco-friendly – a no-brainer when you consider the inefficiency, cost and mining-related health and ecological concerns of lithium batteries. Crucially, a graphene supercapacitor may be able to be cycled millions of times whereas Li-ion batteries deteriorate relatively quickly to give only ten years of usable lifespan. The long service life of graphene supercapacitors offer unparalleled waste reduction and reliability in comparison to the life of lithium batteries.

Another glaring difference between lithium batteries and graphene superconductors is how the former is mined. Generally, it is cheaper to mine the main elements of lithium-ion batteries – iron, copper, nickel, and cobalt – than it is to recycle. In addition to the environmental costs, this raises concerns about future shortages.

Bolivia’s Uyuni salt flats are an example of the ecological and human consequences of lithium mining. The salt flats rest on top of the second-largest lithium deposits in the world but there are political and geographical hurdles dividing the “white gold” in the ground and the outcome of powering products. In Uyuni’s case, the emphasis has been on solving these challenges with less concern paid to the impact on the same water reserves farmers and families need to survive.

Uyuni Salt Flats, amid the Andes in southwest Bolivia, sits atop the second largest lithium reserves on earth.

What sets graphene apart are the ways it can be manufactured. One method is to extract carbon dioxide (one of the most widely accessible compounds) from the air and, through a process resembling photosynthesis, isolate it into an atomic layer of graphene. This is used to create carbon neutral batteries, solar panels and an entirely new form of biodegradable, energy efficient hardware.

There is great promise in graphene supercapacitors to overcome the storage limitations of batteries connected to solar PV plants. Batteries that store energy to be used when the sun goes down have wide-ranging benefits; one of which is extending the usability of solar energy beyond daylight hours.

What’s most exciting about using graphene to store energy is the opportunities it creates to “time shift” solar power cost effectively. Consider that solar energy generation profiles often don’t line up with the demand profile of the grid (which peaks in mornings and evenings). By combining solar with storage, you turn solar from a passive non-dispatchable energy source, into a highly sophisticated, rapidly deployable energy source that can be activated when the grid needs it most or when energy costs are highest. This has the potential to accelerate smart grid technology to a point where grid operators can draw on energy from distributed solar sources without limitations. Solar energy generators could even sell this power at a premium.

To offer a balanced view, it’s possible that the energy density of graphene won’t match Li-ion on a weight/volume basis. If so, then even if graphene is far cheaper than Li-ion on a storage capacity basis, it won’t be practical for mobile applications such as EVs where space is strictly limited. For example, if an EV’s Li-ion battery offers energy density of 877.5 Wh/l (watt hours per litre), a supercapacitor would need to be ten times the size of the Li-ion battery to deliver equivalent range, leaving not much room for the driver! That said, a larger and lower cost graphene-based storage system is perfectly suited for fixed applications such as in houses and buildings where space and portability isn’t a priority.

As solar continues to emerge as a major energy source, energy storage innovation must grow in unison. In Germany, where over 40 percent of the grid is now wind and solar powered, getting batteries installed across their grid will be crucial for renewables to gain more market share against thermal power stations that provide baseload. Graphene promises to bring storage costs down so that a grid could theoretically be entirely wind and solar powered and deliver energy that is cost competitive to fossil fuels and nuclear energy, without compromising on reliability and accessibility. Sun Exchange's vision of an entirely renewable energy powered world connected to the sun, will require such technologies as graphene supercapacitors to meet modern day energy requirements, whilst reducing the impact on the natural environment to achieve this reality.


Back to blogs
Legal DisclaimerPrivacy PolicyTerms of ServiceVulnerability Disclosure PolicyPOPIA