You’ve likely noticed that the Sun Exchange team has been very busy solar powering schools across South Africa. Now, we’re moving on to solar powering an entirely different, yet equally important, type of organisation. Our next solar project will be for Welverdiend Retirement Resort in Cape Town, South Africa. The crowdsale will open to the public Tuesday, 4 June at 10:00 a.m. SAST (8:00 a.m. GMT). Sun Exchange is thrilled to bring on its first retirement home project, as this 94.6kW project will improve living standards and reduce the cost of living for retirees. 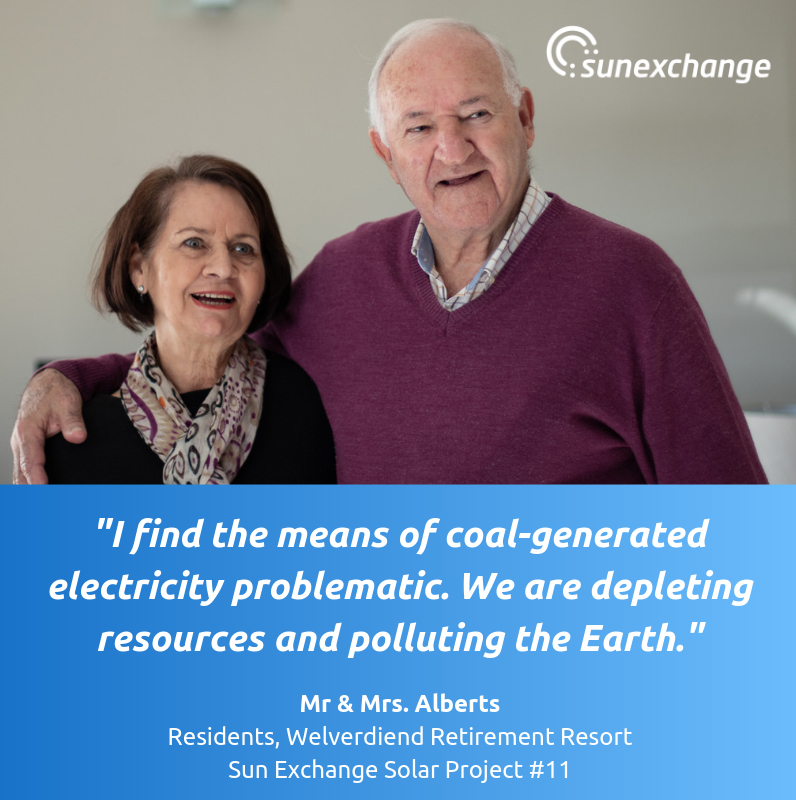 As you’ll see in the project video below, we heard heartwarming and compelling anecdotes from several Welverdiend residents who shared why going solar is important to them. One of the key reasons is that with today’s higher standards of living and longer life expectancy, retirement has become increasingly costly. The Welverdiend solar project is projected to cut the retirement resort’s energy costs from day one.

Another reason Welverdiend residents are overwhelmingly supportive of the upcoming solar project is their sense of responsibility for the future of the environment and climate, and how young people will be impacted. Resident Gert Bester told us, “I hope this project will not stop at Welverdiend, but will go right through Africa, South Africa and the rest of the world so that we can make a better place for future generations.”

Health and safety concerns also motivate Welverdiend residents to want to take action. The New York Times recently reported¹ that older adults are not only among the most intensive energy consumers, contributing significantly to climate change-causing emissions, they are also much more vulnerable to increasing extreme weather such as heat waves and extreme storms caused by climate change.

Sun Exchange has nominated DementiaSA as the charity for this project. DementiaSA is a South African non-profit that assists families, communities and health professionals who have limited access to private healthcare, to live with dementia or care for those with dementia. When you purchase solar cells for the Welverdiend solar project, you can choose to allocate a proportion of your rental income to DementiaSA and support the invaluable work they do.

Purchasing solar cells in the upcoming Welverdiend Retirement Resort solar project is a unique opportunity to reduce carbon emissions and lower living costs for retired South Africans, while earning an estimated 11.45% IRR. Make sure you’re registered as a Sun Exchange member and are ready to go on Tuesday so you don’t miss out!

Back to blogs
Legal DisclaimerPrivacy PolicyTerms of ServiceVulnerability Disclosure PolicyPOPIA